Take Us To DCI For Taking Your Bribe – Infotrak Dares Kiraitu 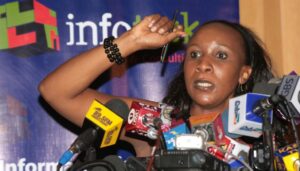 Infotrak has refuted claims by Meru Governor Kiraitu Murungi that it solicited a bribe in exchange for better ranking in the recent poll on counties’ and governor’s performance.

Infotrak founder and CEO, Ms. Angela Ambitho challenged Governor Kiraitu to file a report with the investigative bodies over the alleged corruption claims.

“I dare them to go and report the crime to police and state when the solicitation was done, by who and under what circumstances,” Ambitho told NTV.

The Infotrak Countytrak Performance Index ranked each county according to its capacity to deliver devolved functions including health, agriculture, roads, early childhood education, and social energy among others.

In the survey, Murungi was ranked among the worst performers at position 38 with a 46.7 percent mean score.

The Meru governor was among the county chief who seem unhappy with the findings from the poll, which showed that they had underperformed in service delivery.

But Ambitho maintained that the poll reflected the views and contained the aspirations of the electorates.

“If you don’t care about the public view, then you shouldn’t be a public officer or hold public office,” she told the national broadcaster.

Ambitho challenge Governor Kiraitu and other governors to stop “pandering to the public gallery and focus on delivering services to the people”.

Governor Kiraitu and his Isioli counterpart Mohamed Kuti were listed as the worst-performing county bosses in the easter region.

Murungi’s mean score of 46.7 percent was a major blow to the people of Meru compared to his predecessor Peter who had a mean score of 64.5 percent in 2015.