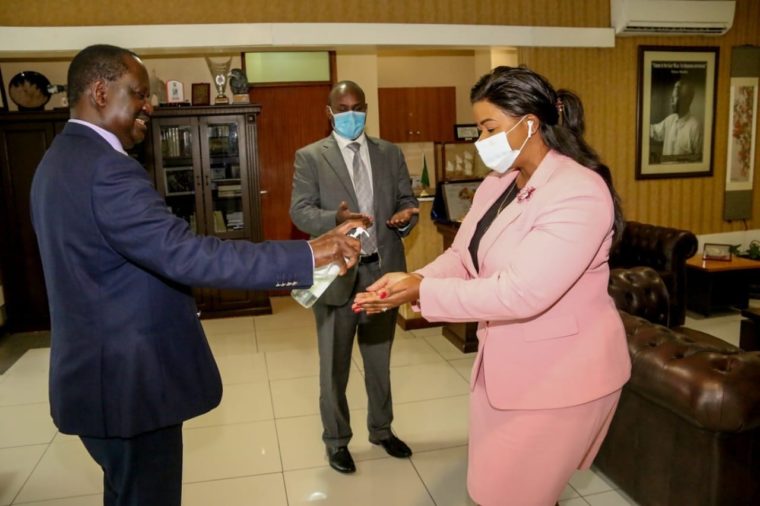 In the recent past, we have seen a stream of Ruto allies making their way to Capitol Hill to meet ODM leader, Raila Odinga to pledge allegiance to the handshake power axis.

Recently we have seen, Catherine Waruguru, Laikipia Woman Representative the ODM leader, a move that has been seen as a ground opening for other rebel leaders.

The two perceived Ruto die-hards have in the past dismissed Raila together with his alliance with President Uhuru Kenyatta. As the leaders move towards Kenyatta’s camp, other leaders such as North Imenti MP Rahim Dawood who have been undecided moved to Kenyatta’s side.

Dawood retaliated that other leaders are soon jumping into Kenyatta’s ship.

In Central Kenya, most of the Kenyatta’s support comes from Murang’ a compared to his Deputy. The MPs from Murang’a have always supported the president include; mary Wamaua (Maragua), Ruth Mwaniki (Kigumo), Nduati Ngugi (Gatanga), Peter Kimari (Mathioya) and Murang’a County Women Rep Sabina Chege.

In Kiambu County, the president has backup from many Legislatures except Kimani Ichung’wa (Kikuyu, Moses Kuria (Gatundu), Simon King’ara (Ruiru) and Gabriel Kago (Githunguri). In Nyeri, the president can count on Ngunjiri Wambugu (Nyeri Town) and Kanini Kega (Kieni).

In Kirinyaga, Embu, Laikipia, Nakuru, Nyandarua and Tharaka Nithi all MP were previously on DP Ruto’s side.

In the Senate, Kenyatta enjoy the highest number of support from the senators with DP Ruto only having supports from Mithika Linturi (Meru), Kithure Kindiki (Tharaka Nithi), John Kinyua (Laikipia) and Susan Kihika (Nakuru)

“We will get all these fellows behind the president in a matter of days. It is no longer a question of if but when. Some of them are beginning to confess how they were misled but we have no problem allowing them back into the fold,” Kang’ata said.

Kiharu MP, Ndindi Nyoro admits that Warugur’s move caught them off guard. Nyoro admitted that politicians are driven by choices and interests.

“As allies of Ruto, we wish Waruguru well in her journey. She was among the vibrant leaders we relied upon and we hope she will soon come back as she will not fit in Kieleweke team,” Nyoro said.

According to Meru Senator, Mithika Linturi, the visits to Capitol Hill is a desperate move to create a political perception against reality.

“Dr. Ruto remains the clear front runner in the 2022 race and will not be shaken by a few people leaving his camp simply because his support is in the population and not by some few point men,” Linturi said.

Linturi also dismissed the claims that he had also visited ODM offices.“Some people are hoping that one day, a leader will stop to take a call of nature in Upper Hill and be reported to have moved political camps,” Linturi said.