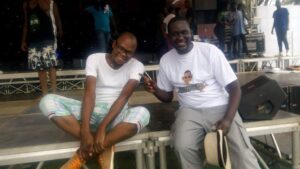 Churchill show host Daniel Ndambuki aka Churchill has said he won’t contribute to the funeral for the burial of former employee and comedian Othuol Othuol claiming he gave him a platform and did not use the chance.

Sources claim that the burial organizing committee for the late Othuol had appealed to Churchill to contribute Ksh 100,000 towards the burial preparations.

However, Churchill is said to have vindicated the amount required of him to contribute to be too much, despite offering the late comedian enough platform which could have seen him prosper in life.

Churchill is said to allege that at one point he offered and took Othuo to a rehabilitation center where he paid for everything after the comedian has seriously indulged in alcoholism.

A leaked Whats App voice call between Churchill and Sandra, aka Silphrosa, Churchill is heard saying he had gone beyond brotherhood in trying to save Othuol Othuol from alcoholism and abject poverty.

“I gave Othuol Othuol enough platform to showcase his talent and use it wisely. I have in the past gone beyond brotherhood to try to save Othuol from alcoholism and poverty.it was his choice and he used it to his best. You cannot, therefore, force me to raise Ksh 100 k for hIs burial arrangements”, Churchill is heard saying in the alleged recording.