Harambee Stars today clash with the African giants Egypt in a crucial Group G fixture of the 2021 African Cup of Nations Qualifiers at Kasarani Stadium.

The match can be described as a clash of the Titans as Harambee Stars seek to get all the three points to renew the qualifications hopes.

As it stands, the Pharaohs are top of the group with eight points, alongside Comoros who are second with the same number of points but with an inferior goal difference.

Kenya are third with three points, while Togo are at the bottom of the table with a point.

While the East African outfit will play Togo away in Lome in their final group game, the Pharaohs will be at home against Comoros. The top two teams will play in the finals in Cameroon.

Here are some players Harambee Stars will depend on to outsmart the Egypt side:

Having featured for 80 minutes after replacing injured Patrick Matasi in Harambee Stars’ famous 1-1 draw in Cairo, Otieno will have another duty of stopping the deadly Egyptian attack. He is expected to be the busiest goalkeeper of the two tonight as he comes face to face with players like Mohamed Salah (Liverpool), Mahmoud Trezeguet (Aston Villa), Mohamed Elneny (Arsenal) and industrious Zamalek midfielder Tarek Hamed.

Many will be expecting Joash Onyango to replicate his solid performance in last month’s Champions League tie when Simba SC faced African giants Al Ahly. In the absence of the injured Joseph Okumu, the hard-tackling former Gor Mahia defender is likely to be the man tasked with the role of assisting Eric Ouma to tame Liverpool forward Mohamed Salah.

Though Anthony Akumu is seen as Victor Wanyama’s replacement, he will have a lot to prove tonight more so after starring in an unfamiliar central defensive role at Kaizer Chiefs.

But depending on the position Jacob ‘Ghost’ Mulee will field Akumu, this could be an opportunity for the Harambee Stars coach to know how well to build his team around the lanky defensive midfielder.

Cliff Nyakeya has recently been one of the brightest sparks in the national team. The former midfielder of the year has his ability to take on defenders to thank for. He also has the pace to run behind his markers as well as open up defences with splitting passes.

Nyakeya, who plies his trade with Egyptian club FC Masr which was recently renamed  ZED, has excellent skills on the ball and an unmatched eye for a pass.

He has scored twice and got involved in almost all the goals Harambee Stars have scored since coming off the bench to set up Michael Olunga for the equaliser in the famous 1-1 away draw against Egypt in November 2019.

He then delivered another assist for Johanna Omolo’s screamer against Togo (1-1) at Kasarani Stadium before producing his man of the match performance in Stars 2-1 friendly match win over Zambia in October last year.

For Kenya to win, this man must deliver. Kenyans will be pinning their hopes on their leading striker Michael Olunga, who is returning to the team after missing the two-legged Afcon qualifiers fixture against joint leaders Comoros due to Covid-19 travelling restrictions.

The Al-Duhail SC striker’s absence had a significant factor in Kenya’s results against Comoros (1-1 and 2-1) as they struggled in front of goal and lacked composure in the box.

He is great in all aspects of the game. With his great positional ability, it is certain that Olunga will stretch The Pharaohs defence if not marked. He will definitely be key if Harambee Stars are to come out of the match with the maximum points.

Egyptian side has also some fantastic players to Watch, they include:

Mohamed El-Shennawy was between the posts when Kenya held Egypt to a 1-1 draw in Cairo three years ago. He will once again meet Harambee Stars captain Michael Olunga tonight again barely a month after his club Al Ahly beat Olunga’s Al-Duhail 1-0 in the Club World Cup.

Egypt’s qualification will rest heavily on the shoulders of the Al Ahly captain. 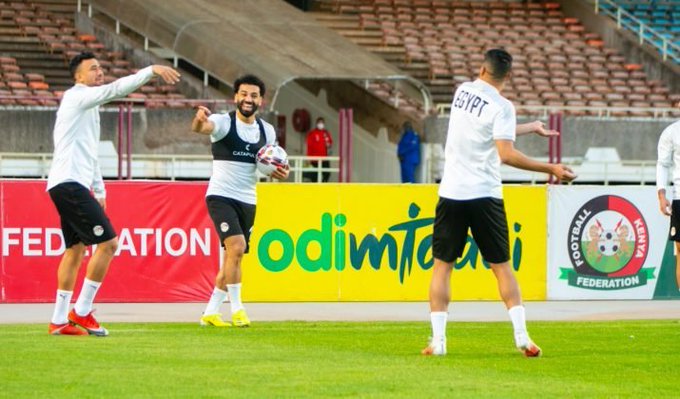 The Liverpool forward will feature for the Pharaohs for the first time in almost two years at Kasarani tonight.

Mohamed Salah has not only emerged as one of the best attackers in the English Premier League but also in the world. Salah, who has been devastating in front of goal, has so far scored 17 goals in the Premier League this season. He will definitely give the Kenyan defenders a run for their money.