There’s trouble brewing inside the Tanga Tanga camp and it’s not funny, not one bit.

The camp which is in tandem with Deputy President of Kenya Dr. William Samoie Ruto has seen members of the political wing allied to the DP going for each other’s necks to the surprise of many political pundits.

That being said, there have been loyal politicians in the Tanga Tanga group who have maintained their allegiance to the DP’s side with one among them being Moses Kuria and Soy MP Caleb Kositany.

Moses Kuria going for Kositany’s jugular on social media came as a surprise to many and keen observers, they might agree that Moses Kuria did something that was uncalled for.

Former Jubilee Deputy Secretary-General Caleb Kositany earlier took to social media on Sunday to urge and plead with the government of Kenya to change their narrative and focus on important issues like reviving the economy rather than using most of their time concentrating on what the man from Sugoi is up to.

Kositany is of the opinion that the 2022 succession politics should be left to God and the Kenyans who will be voting for the next President of Kenya.

“If the deep state could divert the negative energy, against one harmless man into positive energy, our economy would be thriving. Focus on revival of our economy, leave 2022 succession to God and the Kenyan voters. Just the way President Kibaki did. It’s not impossible or? Baraka”

Moses Kuria didn’t take Kositany’s sentiments lightly one bit and threw a subtle jab at him telling him to rather concentrate on God instead since it is a Sunday and all. 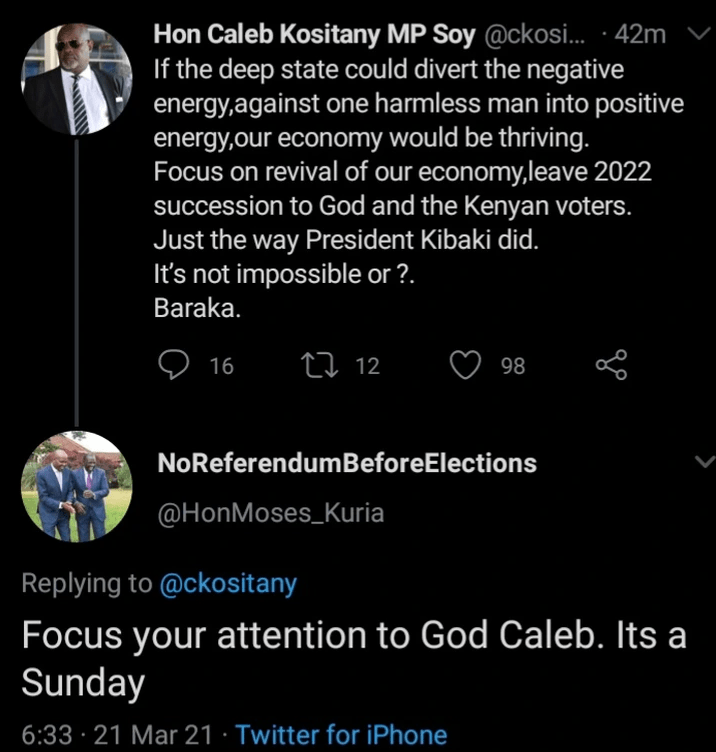 Kimani Ngunjiri Defends His Decision To Vote ‘YES’ On BBI