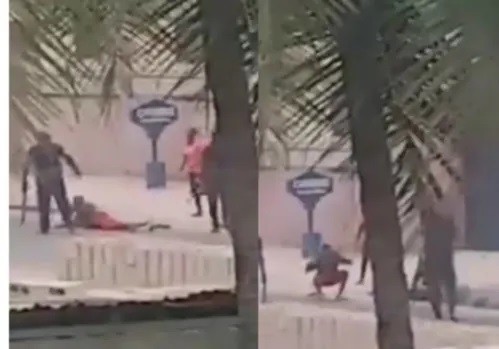 There was an uproar after a police officer was caught on video flogging a civilian with a machete.

In the video making rounds in the social networks, four police officers are seen forcing an unknown man and woman to frog jump in a quiet street. The man was later seen forced to lie on the road as the police officers canned him using a machete.

The security officers could be heard, from the video, shouting at a man who appeared helpless.

It is still unclear why the two civilians were being punished by the officers.

But from the background voices in the video, it seems the brutal assault on the two was linked to the Tuesday attack on a police station in the city.

Reacting to the video, the local government – Abia State Government – described the incident as a “cowardly attack” by the officers.

“While we sympathize with the Police over the cowardly attack by yet to be identified hoodlums, we will not tolerate acts of brutality against innocent Abians and residents.

“The state government will investigate the authenticity of the video with a view to punishing whoever is found to have unleashed brutality on innocent citizens.

“We call on the police not to succumb to the temptation to engage in knee-jerk response but to painstakingly identify the culprits and bring them to justice,” Abia State Government Commissioner of Information John Kalu told Premium Times, Tuesday.

Nigerians have since taken to social media to react to the video amid the continuity of police brutality in the country.

Some citizens have called for an uprising noting that the police have not right to attack citizens who they are meant to protect.

One Twitter user called Iphi Josh wrote: “This kind of video is enough to start an Uprising. Whatsoever the offence, police have no right to attack the people they are meant to protect. Why is the country sleeping?”

One Real Moris said: “Why can’t you guys mobilize people and ask them what’s going on???”

REVEALED: Tiger Woods Was Crazily Over speeding Before The Accident