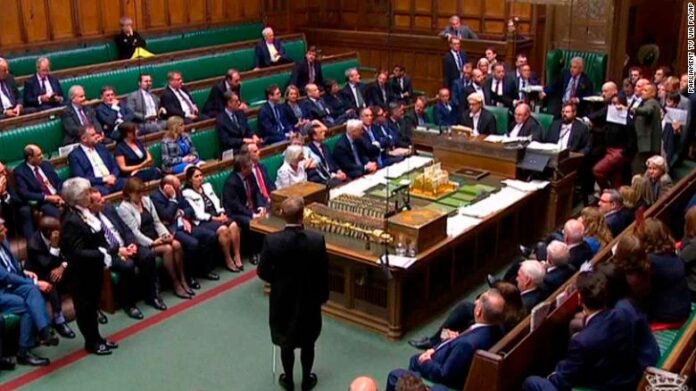 United Kingdom’s parliament on Monday voted in favor of International sanctions against Nigeria’s government over its violent crackdown of #EndSARS protests.

Nigeria’s army and police called in to stop the protests have been accused of committing widespread atrocities.

The CNN exposé painted a picture of how members of the Nigerian army and the police shot at the crowd, killing at least one person and wounding dozens more.

The investigative piece prompted activists in Western countries to call on their governments to impose sanctions on Nigeria’s government.

UK parliament on Monday unanimously voted to impose sanction on Nigerian officials involved in excessive use of force on peaceful protesters during the 20th October, 2020 anti-police brutality demonstrations.

British lawmakers also condemned the government of President Muhammadu Buhari for the attack and intimidation of protesters who took part in #EndSARS demonstrations.

#EndSARS protest against police brutality turned violent after thugs attack peaceful protesters and later begin to vandalize both government property and those of private citizens.

Nigeria’s Minister of Information, Lai Mohammed, has since called on UK lawmakers to desist from imposing sanctions on Nigerian government officials.

Speaking to a Nigerian media -NTA on Wednesday, the Information Minister urged foreign countries to seek the truth before basing their decisions on “fake news” while imposing sanctions on Nigeria.

“We earlier stated that governments all over the world who have taken hasty decisions about Nigeria on this issue should please seek the truth. If the decision of any government all over the world is based on fake news, it is very risky. It brings me to the issue of the UK Parliament resolution,” said the Information Minister.

“We are not panicking at all as a government for two reasons – the resolution of the UK Parliament is not the decision of the country and no serious government will take a decision such as imposing sanctions based on fake news. This is why we are warning foreign countries to seek the truth and beware of fake news. The entire #EndSARS protest was fueled by fake news.”