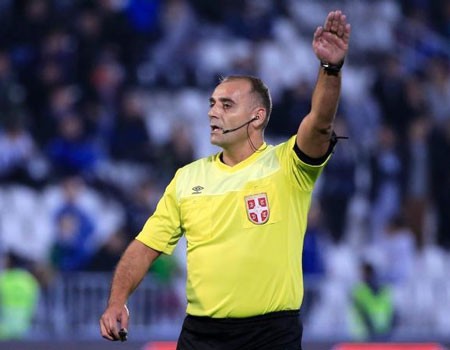 A Serbian referee was sentenced to 15 months in prison for ‘abuse of authority’ after awarding a shocking penalty in the country’s top-flight league.

Srdjan Obradovic, was also handed a ten-year suspension off officiating, was found guilty of charges regarding a Serbian SuperLiga match back in 2018.

Obradovic awared Spartak Subotica a bizarre penalty in the closing stages of their match with Radnicki Nis.

The ruling, which can be appealed, was handed down by the Anti-Corruption Chamber of the High Court of Novi Sad.

Spartak faced off against Radnicki in the penultimate game of the season, knowing the winner would secure qualification into the Europa League.

The home side went on win the game 2-0, but only after Obradovic awarded two penalties, with the second particularly galling for Radnicki.

Police questioned the referee after the game because his performance raised suspicions of possible tamparing and his testimony was used to report him to the prosecution.