Marcus Rashford has been subjected to wild racial abuses after Manchester United lost to Virrareal In the Europa League final.

Through his Twitter account, Rashford has stated that he has so far received over 70 racial slurs and that makes him feel even worse after that loss.

“At least 70 racial slurs on my social accounts counted so far. For those working to make me feel any worse than I already do, good luck trying,” Marcus Rashford wrote.

Rashford has gone further to expose one math teacher who has filled his DM with monkey emojis.

“I’m more outraged that one of the abusers that left a mountain of monkey emojis in my DM is a maths teacher with an open profile. He teaches children!! And knows that he can freely racially abuse without consequence…,” Rashford wondered.

One of the fans went ahead to claim that Rashford deserved the racial abuses after a poor show. 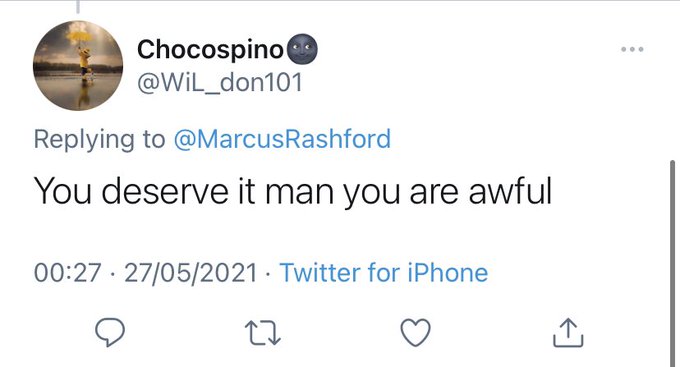 Rashford had one of those difficult nights in the Europa League Final. What has angered more fans is an open chance he missed after receiving a perfect cross from Bruno Fernandes.

Rashford has been receiving a lot of racial abuse forcing even the police to launch investigations.

“Yes I’m a black man and I live every day proud that I am,” Rashford wrote after receiving abuse in January. “No one is going to make me feel any different. So sorry if you were looking for a strong reaction, you’re just simply not going to get it here.”

Rashford scored his spot-kick in the shootout before David De Gea’s miss – after 21 straight successful efforts – handed the Spanish club the trophy. The United forward said a runners-up medal – his second this season after United finished behind Manchester City in the Premier League – was no consolation.

“I don’t want to hear, ‘they were so close. It doesn’t mean anything. There is one winner and one loser and today we lost. We have to find out why and make sure next time we don’t lose.” Despite the disappointment, Rashford insisted United would return stronger next season.

“The feeling inside is difficult to explain because we came here to win,” he said. “We have been working so hard all season and this was the opportunity to win a trophy and it didn’t happen for whatever reason. We have to get rid of the disappointment and after that, we need to look back at the game and see what we’ve done wrong and where we can improve.

“All I can say is the team will not give up, there is no chance this team gives up. The manager will not give up, he will not allow us to give up. We will come next season with a bigger desire. We have everything to compete at the highest level. We just have to show it to the world and show it to ourselves.”