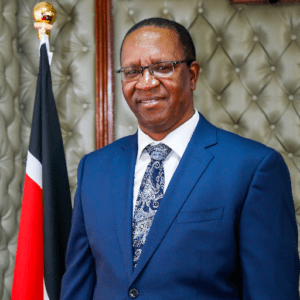 Kibicho has refuted claims that the registration exercise was mandatory.

Kibicho said the government had only stressed the importance of the registration to the general public.

“We were telling them the benefits but it was not mandatory. At no one instance have I claimed it was mandatory,” he said.

Kibicho disclosed that the government is yet to process the data captured in the Huduma Namba registration.

The PS told the court the data “is sitting idle” because of a High Court order.

“We had put everything in place but the court stopped its processing,” he said.

The case was filed by Kenya Human Rights Commission and the Nubian Rights Forum.

Kibicho said the registration will cost Kenyans Sh9.6 billion, Sh7 billion of which has already been spent.

“In fact, the question should be after Sh7 billion and the urgency of the Huduma Namba registration, what exactly is the position of the numbers we were supposed to be given and why have the numbers not been given?” asked Makueni Senator Mutula Kilonzo Jnr.

“There is anxiety among Kenyans. We know that in a civilized society, the value for money is very important. We have spent a lot of money.

There is no value for the last six months. It is in order that we get value for our money,” Migori Senator Ochillo Ayacko said during a heated debate on the floor of the House on Thursday.