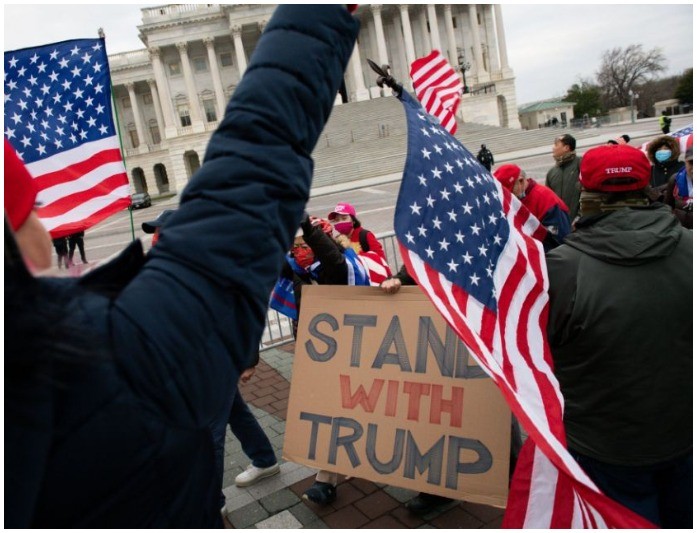 The two houses of US Congress were meeting in a joint session on Wednesday January 6th to count and confirm each state’s electoral votes.

The pro-Trump supporters marched to the Capitol building after Trump addressed them outside the White House urging them to stage demos.

Police barricading the Capitol building were overwhelmed by hundreds of pro-Trump supporters who forced their way into the chambers.

The chaos forced the Senate to evacuate and Vice President Mike Pence to be ushered to a secure location.

Pence could be seen rushing out of the Senate chamber amid the sounds of protesters who surrounded the Capitol building.

The doors of the Senate were closed and locked, and senators were told to stay away from the doors.

The Federal Bureau of Investigation (FBI) have arrested dozens of people who participated in January 6th riot and insurrection at the US Capitol.

US Justice Department brought more than 80 criminal cases in connection with the insurrection at the Capitol building.

Confessions from some of detained insurrectionists convinced prosecutors that the rioters were out to spill blood.

“Strong evidence, including Jacob Chansley’s (Arizona QAnon conspiracy theorist who was photographed wearing horns standing at the desk of Vice President Mike Pence in the chamber of the US Senate) own words and actions at the Capitol, supports that the intent of the Capitol rioters was to capture and assassinate elected officials in the United States government,” prosecutors wrote.

Many of the people charged so far were easily tracked down by the FBI, which has more than 200 suspects, thanks in large part to videos and photos posted on social media.

Related: At Least A Dozen People Fired From Their Jobs For Storming US Congress