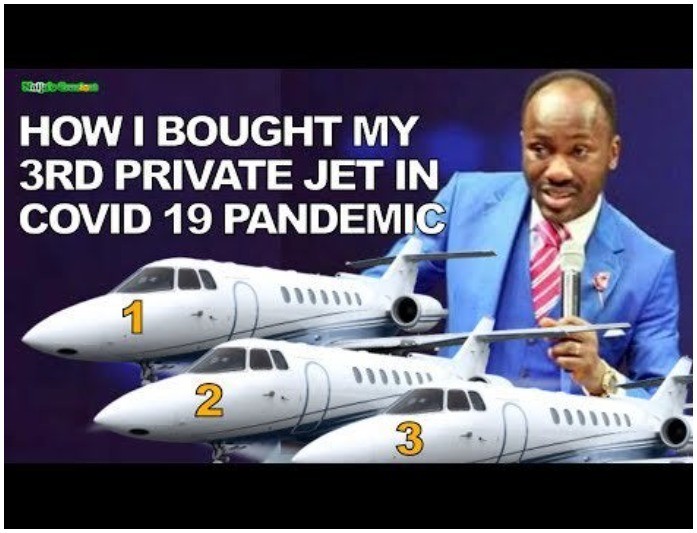 Nigerian Preacher Apostle Johnson Suleman doesn’t want Covid-19 pandemic to end because he made so much money during this period he even bought a private jet.

The preacher revealed he bought another jet during a sermon that was captured in a video making the rounds on social media.

The preacher further sensationally stated that he prayed asking God to extend Covid-19 pandemic period because he got ample time to rest.

“In Covid (pandemic) I bought a jet, the third one. I have three. I was praying for Covid-19 not to end because I was resting. While people were complaining, my wife asked, ‘Can life be this sweet?’ Am I talking to somebody here?” Apostle Suleman said.

“No stress. I read on the Internet that there’s a rumour going around that I have a machine that prints money. I like that rumour. They say, ‘he should be investigated. He has a machine that prints money. Somebody asked if it’s true and I said it is true. They said, ‘It’s risky o’. I said I didn’t know it’s risky because I already bought the machine. When you speak in tongues, you’re printing money.”

The controversial preacher bought his first jet sometimes in March 2019. He took to Facebook where he posted photos of jet.

“Join us as we congratulate our FATHER, The Restoration Apostle, GOD’s General, GOD’s own Oracle, A Dispensation of our time, The Lion Of Africa #APOSTLE_PROF_JOHNSON_SULEMAN on his brand new private jet for the propagation of the Gospel of CHRIST to Nations of the World with His Undiluted Word of Power, Signs, Wonders, Deliverance, Healing & Restoration and the Prophetic. (Mark 16:14 – 18; Luke 4:17 – 23).
He has paid his dues. As you rejoice with him, whatever you are believing GOD for shall manifest in a hurry! Daddy Sir, you belong to the air, keep SOARING..” Omega Fire Ministries International announced.

Find out Why Most Kenyan Men spend over 2 hour in Barbershops.

Rose Muhando: I stayed with an Abusive Church Elder for years.

Failing is part of the Journey.