Nick Mwendwa Beaten In His Bedroom 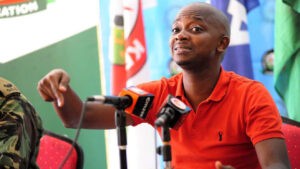 Football Kenya Federation (FKF) President Nick Mwendwa has suffered a big defeat in his own “bedroom” after his preferred candidates were knocked out in Nairobi East – his perceived stronghold during the county polls held on Saturday.

City lawyer Amos “Wakili” Otieno who making his first attempt for the position after missing the first two elections that were nullified by the Sports Disputes Tribunal (SDT) where his competitor went unopposed, won against all odds as he trounced George Onyango by six votes to be the new chair.

Out of the 98 delegates who took part in the polls, Otieno garnered 51 votes against Onyango’s 45 votes. One vote was canceled.

“I thank all the delegates for electing me and I’m extending an olive branch to my opponents to come and work with us for the better of sports in Nairobi. Work will start immediately and we are going to make Nairobi great again,” Otieno told the People Sports.

Mwendwa’s brigade known as Team Blue which previously won the majority of the seats in the county also suffered a massive defeat in Laikipia, Nyeri, Mombasa, Kwale, Kisii, and Vihiga counties putting the popularity of the group in doubt.