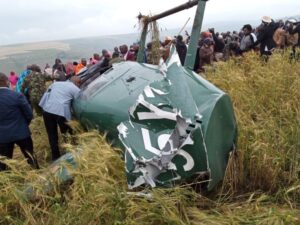 The Governor had left the burial of the late Mzee Tombo Ole Sasai at Olenkipejus village in Melili, Narok County when the incident occurred.

The deceased was the father to late Narok Finance County Executive Committee (CEC) who was a member in Governor Tunai’s Cabinet.

The Governor, Narok East Mp Ken Kiloku and two other occupants of the helicopter escaped unhurt but were rushed to a nearby health facility for check-up. 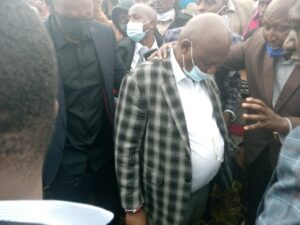 Investigations are on to establish the cause of the crash.

The accident attracted a huge crowd as area residents tried to catch a glimpse of the aircraft.

Governor Tunai said he felt okay but was headed to Nairobi for a check-up.