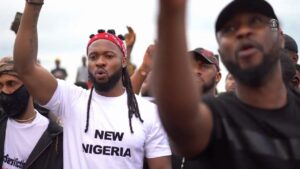 The protests were staged across major Nigerian towns and in the diaspora for the last two weeks.

The protest was a youth-led movement that began on social media, as they protest against police brutality and violence against Nigerians.

The protests saw many top artistes join in the demonstrations that led to many lives being lost and hundreds of Nigerian youths being injured and hospitalized with the hope of demonstrations being experienced in Lekki were there is an alleged military shoot of peaceful demonstrators using live bullets.

The eight-minute video posted on YoutTube Mr Flavours alongside other artists including Phyno, Zoro, Masterkraft and K-Cee highlight key moment where the musicians are leading protests in solidarity with their fellow Nigerians.

Other Nigerian artistes who have been directly involved in the  #EndSARS protests include Rudeboy, Davido, Oxlade, Mr P, and DJ Cuppy among others.