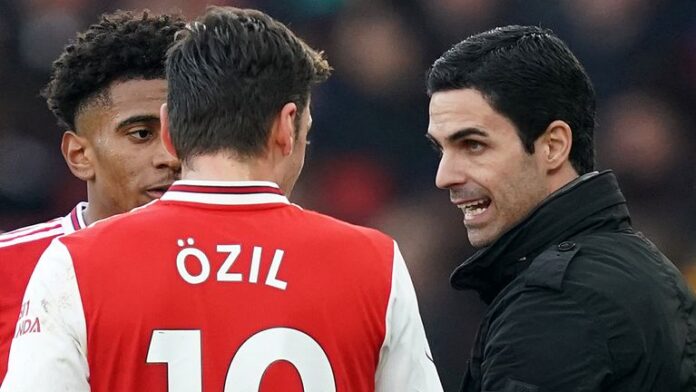 Arsenal boss, Mikel Arteta has been asked to apologize to Arsenal’s outcast, Mesut Ozil for leaving him out of the squad and get him back to the first team to save ailing Arsenal’s Premier League season.

Arsenal will be looking to get the three points in their home game against Burney on Sunday after failing to win in their last four league matches – three of which they have were defeated.

The Gunners have suffered from a lack of creativity in the midfield, and this was evident in last weekend’s North London defeat to Spurs.

Arteta’s side had the greater share of ball possession but would not transition that in their final third.

But for things to turn around the club, the major decision has to be made by Arsenal manager Mikel Arteta, according to  Arsenal legend Paul Merson.

“Arsenal could still be playing Tottenham now and they wouldn’t have scored a goal,” said Merson in his Daily Star column.

“What can they do in January to fix it? Go and knock on Mesut Ozil’s door, say you’re sorry and you need him to play!

“Arsenal were atrocious against Spurs. They never looked like scoring. Ozil’s getting £350,000-a-week and sitting at home while his team can’t score.”

Ozil has in the past drawn criticism over his perceived lack of work rate, and Marson admits the German international is not always ideal for games when Arsenal need to roll their sleeves up.

But Marson insists that Ozil would be a perfect option for unlocking defenses in games Arsenal have a lot of possession.

“I’m not saying play him against Manchester City or Liverpool when you’re not going to see much of the ball,” said Merson.

“But against teams like Spurs or Burnley, he can get on the ball and dictate things and make a few decent chances.”

Ozil has not played for Arsenal since March and he was left out of the Gunner’s Premier League and Europa League squads for the first half of th season.

But that could change if Arteta brings back to the squad in January and Marson believe that should happen if Arsenal wants to climb up the table.

“They could re-register him in January. They’re missing a trick if they don’t,” Marson said.

Related: Arsenal Fans In Naivasha Stone A Man To Death After Mocking Them On Weekend Defeat