Olunga came to the rescue of Matasi and his family who were involved in a road accident and got admitted at the Kakamega County General Teaching and Referral Hospital.

Matasi and four other family members, who include his wife and son, were involved in a gruesome road accident on June 1 at Lessos area, along Nakuru-Kapsabet highway while returning to Nairobi from Kakamega.

They had attended their grandmother’s burial. 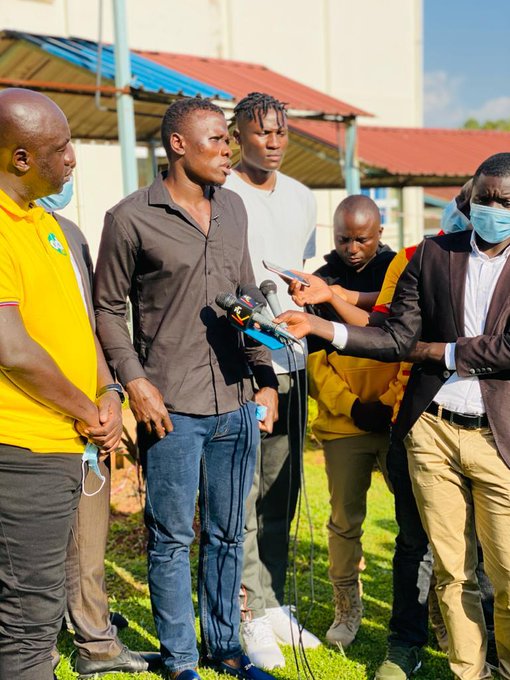 While Matasi and two other relatives were discharged from the hospital a few days after the accident, his wife and son are still admitted at the facility after they sustained serious injuries in the accident.

His wife and son underwent foot and shoulder surgeries respectively.

The former Posta Rangers, Tusker, and AFC Leopards shot-stopper who now turns for Ethiopia’s Saint George had put up a paybill number appealing to Kenyans to help him offset the medical bill.

“Today, my heart is overwhelmed with gratitude because of the kind of love that has been shown to my family. Odibets in conjunction with Michael Olunga Foundation showed up at the hospital and cleared our hospital bill. What an act of love! What they have done to me will forever be in our hearts. May they never lack,” said Matasi.

“Matasi has always been a maestro on the pitch and when we heard about the accident that had occurred, we had to come out and help him,” said Odibets Country Marketing Manager Aggrey Sayi, who was also present at the hospital.

“Matasi is a good friend and I wish him a quick recovery and that of his family,” Olunga said.

RELATED POST: DP Ruto Attacks Uhuru For Misuse Of His Power In Recent Battles With The Court