Matiang’i Goes Hard On Leaders Behind The Kapedo Killings 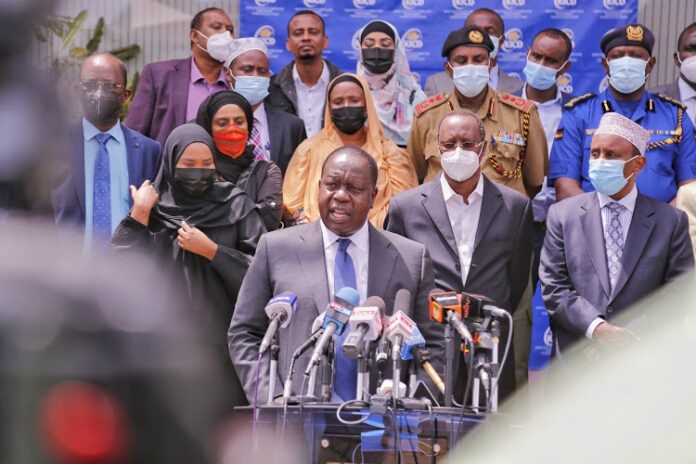 Interior CS Fred Matiang’i has warned political leaders behind the Kapedo killings that their days are numbered.

Addressing the media after conveying a meeting with the North Eastern leaders on Tuesday, Matiang’i said the death of the GSU officer during the attack was premeditated.

“Our senior police officer was murdered, there was no conflict, it was a clear case of a premeditated, planned ambush that was targeting our GSU deputy director of operations,” Matiang’i said.

The CS urged the perpetrators of the attacks to surrender before they meet the law.

“We will go for them no matter how long it will take us. Some people have done that, including leaders and I need to emphasize that. They have gotten away with that kind of behavior for far too long,” Matiang’i said.

“There is a culture in that part of our country which seeks to protect negative and criminal armament that disguises as cattle rustling but in actual fact, it is funded. We are in hot pursuit of certain people including leaders,” he added.

According to Matiang’i, those involved are facilitated to meet with the law adding that by the time they are done, it would be a story to be told for the future generations.

Since 2014, over 49 people, including 21 GSU officers, have died, many injured and thousands of animals stolen by bandits in Kapedo.

According to the Turkana police commander, Samuel Ndanyi, three other people were injured and 10 houses were torched during the attack.

In a report released by the IEBC in 2013, the contested Kapedo political unit lies in the Napeitom ward of the Turkana East constituency.