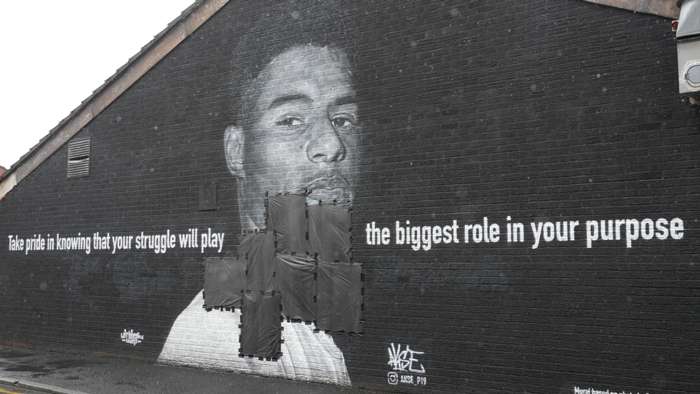 Three black players blamed for England loss to Italy continue to face threats, Marcus Rashford’s artwork has been vandalized in Manchester in the continued racist attacks.

England’s black players Marcus Rashford, Jadon Sancho and Bukayo Saka were subjected to racial abuse after they missed spot-kicks in the penalty shootout with Italy.

The three black players who missed the penalty shootout were subjected to racial abused and trolled in all manners by racist English fans on social media.

The English team has been highlighting issue of racism throughout the tournament, taking the knee before all their matches.

Some fans have booed the gesture, with critics viewing it as an unwanted politicization of sport and expression of sympathy with far-left politics.

In addition to the influx of hateful messages on social media, some English fans are now issuing threats to the three black players and carrying out vandalism.

Marcus Rashford’s artwork displayed on the streets of Manchester has been defaced in the wake of the penalty shootout defeat at Wembley stadium in London.

The mural of the England and Manchester United striker was created by street artist Akse in partnership with community project Withington Walls.

The project’s co-founder Ed Wellard has expressed his disappointment following the racist-fueled vandalism.

“I’ve come out to fix what I could immediately and cover up what I couldn’t and hopefully we will get the artist out to come and fix it. We dared to dream yesterday and our hopes were dashed but to wake up to this is more depressing. Racism seems to be more and more prevalent,” Ed Wellard said.

The English football association (FA) has released a statement vowing to support Rashford, Sancho and Saka while calling on the government and social media companies to do more to stamp out online racism.