A middle-aged man died of stab wounds he sustained in an attack after he was caught over the weekend sleeping with another man’s wife in lodging at Kapwen trading centre, Chepalungu Sub-County of Bomet.

According to KNA, the weekend incident happened when the man whose wife was cheating on him, having suspected they were carrying on an illicit affair, laid a trap to catch the two red-handed.

Sources say the husband of the adulterous woman forced his way into the lodging room by breaking the door and found the two lovebirds sharing the forbidden fruit. 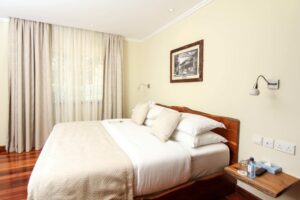 The cuckolded man, who was armed with a dagger, attacked the two leaving the culprit with fatal stab wounds while his wife suffered minor injuries on her forehead.

The deceased is said to have died on his way to hospital having lost a lot of blood through several stab wounds in his stomach, chest, thighs and head among other spots.

After the attack, the husband surrendered to the authorities at Bomet Police Station after members of the public threatened to lynch him.

Itembe sub-location Assistant Chief Samson Kirui confirmed the incident while cautioning members of the public against taking the law in their own hands.

Meanwhile, the body of the deceased has been moved to Longisa Referral hospital mortuary, as burial arrangements get underway.