Manchester United have once again proved to be the reigning Kings of comeback after coming from behind to thrash Brighton 2-1.

Ole Gunnar Solskjaer’s Manchester United team are not always predictable, but certainly over the course of the season one theme has prevailed.

More often than not the Red Devils find themselves in a hole, seemingly playing without any kind of tactical plan as they struggle to beat teams that, in terms of talent, are clearly inferior.

That was yet again the story against Brighton at Old Trafford, as United came from behind to record a 2-1 win over the Seagulls that had Bruno Fernandes’ fingerprints all over it. 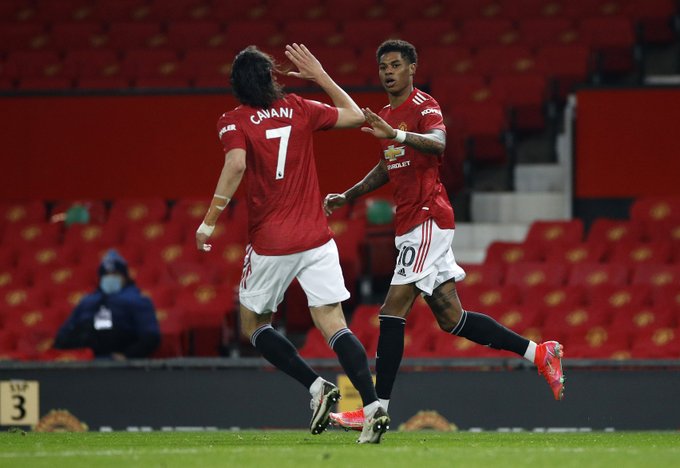 Manchester United have now picked up 25 points from losing positions this season; nine more than any other team. They are comfortable in the top four, but the story of their season could – and possibly should – have been so very different.

“It was a hard night,” Mason Greenwood, who headed in the winning goal seven minutes from time, told BBC Sport post-match. “When they scored the first goal we knew we had to react and put in a better performance.

“Everyone was excellent in the second half. I don’t think we started very well but we knew we had to switch on and be focused.”

That is an all too familiar tale for Manchester United. Yet again in the opening 45 minutes they lacked intensity, imagination and impetus. More often than not they are a drag to watch, so listless are some of their performances.

Of course, there are some mitigating factors. The players are fatigued, not just physically but mentally too after a testing year for everyone both within and outside of the footballing world.

That was the reason given for the disappointment of being knocked out of the FA Cup by Leicester City before the international break, and Solskjaer spoke pre-match here of being optimistic after his players had been given the opportunity to “recharge their batteries”.

The invigorated display the Norwegian coach would have hoped for was not forthcoming, however, and he could be heard yelling at his team to “not slow down” as they took far too long to feel their way into the game.

Brighton needed no such instructions from Graham Potter, and were unlucky to only go in 1-0 up at half-time such was their dominance. Certainly an onlooker with no prior knowledge of the game would have been shocked at which of the two sides on show was battling against relegation.

The visitors’ goal came via a former United man in Danny Welbeck, who scored his third league goal against his boyhood club after beating Aaron Wan-Bissake in the air to head home Neal Maupay’s cross at the second attempt after Dean Henderson saved his original effort.

Potter’s team were well drilled, and it was clear from the goal that they had a game plan, which involved exploiting space when winning the ball back from United and whipping crosses into the box to expose a major weakness of the home side.

Welbeck’s goal came from one such incidence while Lewis Dunk saw a header touched onto the crossbar from a Pascal Gross free-kick before Henderson spilled an attempted catch from a corner, only to be bailed out by his defence.

Manchester United, meanwhile, meandered through the first half in a performance that lacked anything close to inspiration in the final third.

For the first time since August 2019, they went an entire half of league football without mustering a shot on target, with Edinson Cavani putting in a largely anonymous performance in the absence of the injured Anthony Martial, who could now be out for the rest of the season with a sprained knee.

It was a display crying out for a moment of Fernandes magic, and with the Portugal international playing further up the pitch after the break as United at least increased the tempo, the former Sporting C.P. man delivered.

Fernandes drove forward between the Brighton midfield and defence, drawing a man towards him before playing an inch-perfect pass into the path of Marcus Rashford to finish.

United’s No.18 averages an assist every other home league game (11 in 22), and though Rashford’s finish was a good one, this was a goal that would not have been possible without Fernandes. It is fair to ask whether the same applies to United finishing in the top four this season.

Though he did not claim a direct assist for Greenwood’s winner, Fernandes was again at the heart of the move which made it, as his dinked pass from the left found Paul Pogba at the back post, who in turn saw his scuffed volley headed in from close range.

Greenwood insisted after the full-time whistle that United were “never worried” that they would not claim all three points, which is testament to the belief Solskjaer has instilled in his players.

Either that, or they know Fernandes will dig them out of any hole they find themselves in. If ‘giving it to Bruno’ it is a tactic, then it continues to pay dividends.

Over 5000 Left Homeless as Government Goes on a Demolition Spree