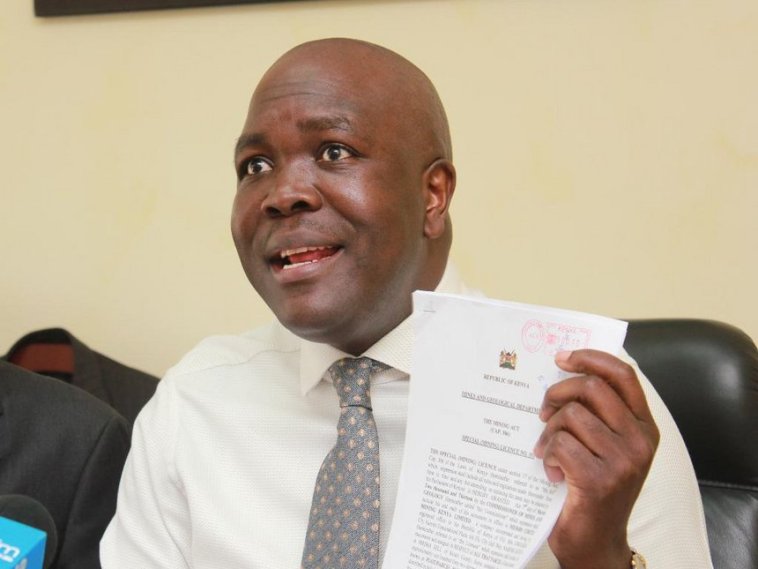 The late businessman Jacob Juma was the face of Erad supplies, a company that is involved in the maize fraud. Jacob Juma served in the company as the managing director.

Jacob Juma together with his co-directors was largely unknown until they receive a court order attaching the nation’s strategic cereal reserves.

The late made it public that he was going to auction the public assets after his company won a case on a breached contract. Jacob, however, died before he could execute the court order and left his co-director with the duty which turned out to be bitter fruit to chew.

And awaiting his sentencing today is the Sirisia MP John Koyi Waluke and Ms. Grace Sarapay Wakhungu, the company co-director. The directors’ problems began back in 2004 when Erad Supplied together with General Contractors Ltd was awarded a tender worth Sh778 million to supply 40,000 tonnes of maize.

Erad was one of the companies that the National Cereal and Produce Board (NCPB) contracted to supply the country with 180,000 tonnes of cereals.

From the tender, Erad supplies were to be paid Sh19,465 per tonne on condition that the company would provide a performance bond of 10 percent of the quality.

Jacob Juma’s company, however, failed to supply the maize which it claimed would have been imported from Ethiopia, leading to termination of the contract even after being paid at Sh300 million.

The firm challenged the matter in court and an arbitrator was appointed who awarded Sh564 million to Erad for breach of contract. The NCPB, however, contested the court’s decision.

Erad then went to court and obtained orders to sell NCPB’s assets to recover Sh564 million despite it not supplying a single grain of maize.

The matter in question was then taken before the Public Investment Committee (PIC) of the National Assembly back in 2013. The committee which Mr. Waluke was also a member then began to carry out an investigation.

Since MP Waluke was a person of interest in the matter, he was excused from the committee’s hearing.

“We are now set to enforce a court decree to dispose of NCPB’s assets arising from the breach of a maize supply contract,” Juma then told PIC.

The order jeopardized the country’s strategic food reserve that held about 2.2 million bags of maize with a proximate value at Sh6.6 billion.

The committee was told that the matter in question had been heard by nine judges who threw out NCPB’s case and upheld its claim for both storage charges and loss of revenue from the maize supply.

The PIC questioned the legality of attaching the property of a key food security institution when no supply was made.

In a report that was adopted by the Parliament, the PIC realized that the NCPB management had awarded the tender to Erad without consulting the Attorney-General, an action that smacked of connivance among Erad, the parastatal staff and some individuals in the Judiciary.

This is because no due diligence, a financial and technical evaluation was conducted to determine whether the company could supply the maize. The PIC established that it was a well-choreographed scheme to steal public money.

From the allegations, PIC barred Mr. Waluke and other Erad directors from doing any business in Kenya and within the East African Community. The committee also recommended that Mr. Waluke and his co-directors be charged.

The committee also prevailed on the executive to begin the recovery proceeding against the company and its directors to recover the money already paid out.

The committee further recommended that no more money should be paid to the firm involved in the scandal.

Ther anti-graft body, EACC was also instructed by the committee to undertake an in-depth investigation of the firm’s dealings. EACC investigated the issue and in 2018, Mr. Waluke and his co-director, Ms. Wakhungu were charged in court over fraud among other charges after the death of Jacob Juma in May 2016.

In most cases, the late Juma was the one running the affairs of Erad while Mr. Waluke and Ms. Wakhungu portrayed a figure on strangers in Jerusalem.

On June 22, 2020, the high court found Mr. Waluke and Ms. Wakhungu guilty of the offense. The two are expected to be sentenced today.

Early this month the two lost petition seeking the quashing of the PIC report that recommended their prosecution for fraudulently. Justice Mumbi argued that Mr. Waluke was an MP and a member of PIC when the issue was being debated by the committee.

Uhuru Suffers As High Court Rejects The 34 Judges He Appointed