Maendeleo Ya Wanawake Organization has called out both Mutunga and Maraga for bypassing their mandate suggesting that the current Chief Justice is incapable of carrying out her duties.

“Both Willy Mutunga and David Maraga have opted to totally bypass Martha Koome in their bid to impose their own legal philosophy and interpretation of the Constitution on her, in effect implying that the current Chief Justice is incapable of carrying out her duties to their lofty standards of supposed perfection. This ‘mansplaining’ behavior is common in many workplaces, where men by their speech act as though women are incapable of understanding complex concepts unless men give their detailed explanations,” part of the message sent to the media by Maendeleo ya Wanawake Organization read.

They have interpreted what both Mutunga and Maraga are doing as total disrespect to Koome who has not even settled in at the helm of the judiciary.

Maendeleo Ya Wanawake has vowed to stand by Koome as he discharges her duties claiming that what women have fought for in all those years cannot be tarnished by a few individuals. 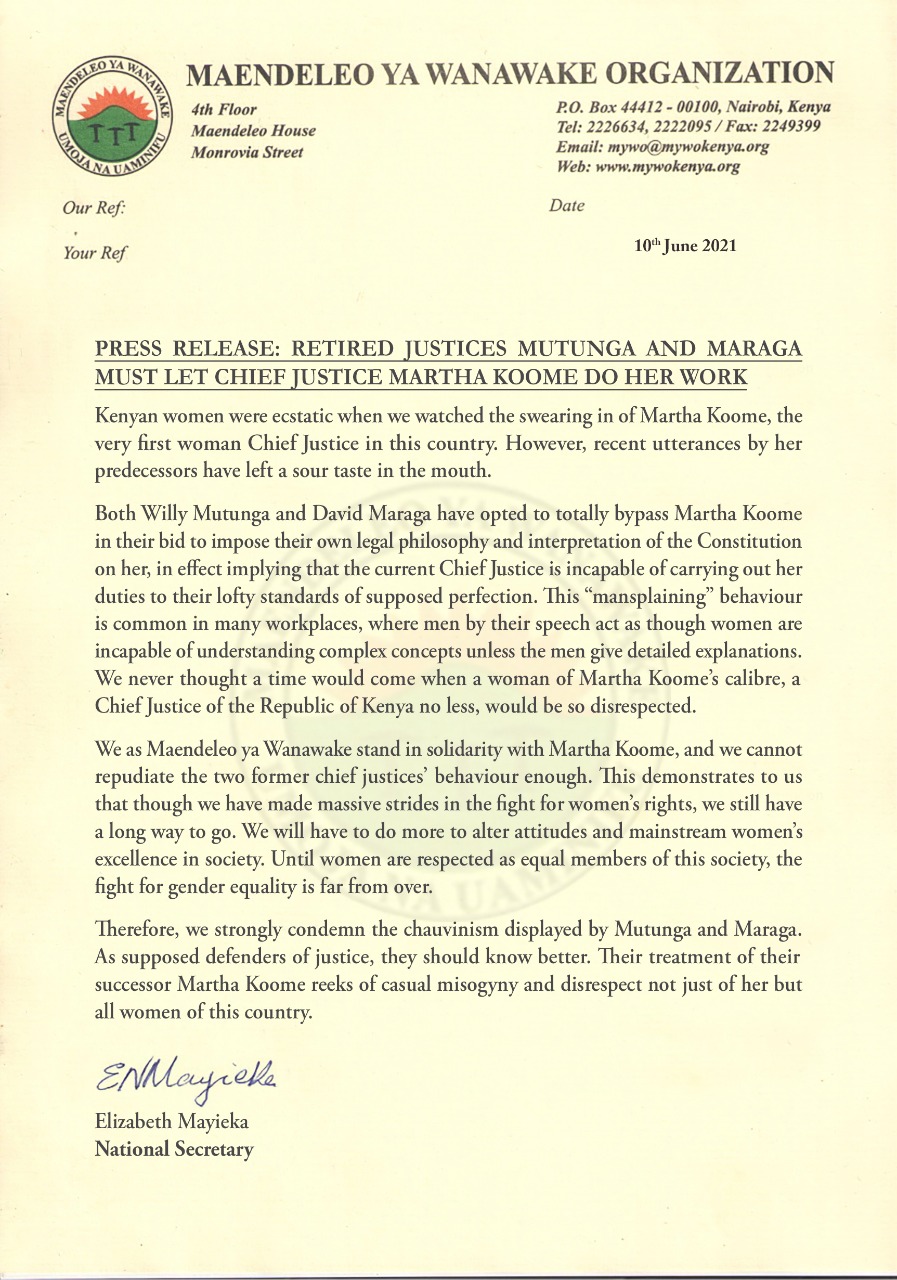 But they are not the only ones who have pulled the gender card on the ongoing talks and attacks on Koome.

Twitter user, Njeri Thorne, who once clashed with LSK President Nelson Havi has stated that Maraga and Mutunga are treading on Koome‘s territory. She added that they would never do that if a man was at the helm of the Judiciary.

“Maraga and Mutunga treading on Koome‘s territory. They’d never do this if she were a man. The misogyny/chauvinism in KE is so entrenched.. it part of our DNA.,” her statement read.

Flamboyant city lawyer Donald Kipkorir has also asked both Mutunga and Maraga to retire peacefully and leave Koome to discharge her duties without outside interference.

Retired Chief Justices Willy Mutunga & David Maraga should enjoy their retirement & lofty benefits in quietude & allow Chief Justice Martha Koome to begin & set her tenure. It is skulduggery for the superannuated duo to try to revision their tenures by squawking in their sunsets!

Ex CJ Mara & Mutunga are out to undermine CJ Koome's authority because she is a woman. If they were unable to do things during their time they should forever hold their peace in their retirement.
They can't keep on talking as though we do not have a Chief Justice in office. pic.twitter.com/EvgX6gtiNK

Martha Koome is not Maraga is not Mutunga. People want her to be what she is not. I choose to let her be her own person. If she fails, it will be sad. If she performs, it will be great.

6 New Mugging And Dangerous Hotspots In Nairobi CBD To Avoid Past 7.30PM