Italy’s ambassador to DR Congo was among three people killed on Monday when a UN convoy was ambushed in the country’s troubles east.

The Democratic Republic of Congo described the incident as a “terrorist attack” and that was blamed on a Rwandan Hutu rebel group.

The ambassador Luca Attanasio died of injury wounds after a  World Food Programme (WFP) ambushed near Goma while he was on a field trip to visit a school feeding program, according to reports.

The Italian government confirmed the death of the ambassador together with his driver and an Italian security officer Vittorio Iacovacci.

DR Cong’s interior ministry blamed the killings on the “members of the Democratic Forces for the Liberation of Rwanda (FDLR),” a Rwandan Hutu rebel group that has plagued the region for more than a quarter of a century. 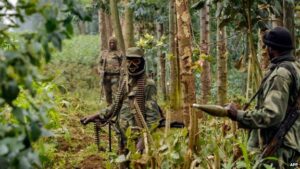 According to reports, 122 armed groups are active in North and South Kivu, Ituri, and Tanganyika provinces.

Monday’s attack occurred north of the North Kivu capital of Goma, in Nyiaragongo Territory — one of the most dangerous parts of the country.

The FDLR is one of a number of armed groups operating in the region.

Some of the FDLR’s founders were involved in the 1994 Rwandan genocide when the Hutu majority killed 800,000 people, mainly Tutsis as well as Hutu moderates.

The FDLR is reportedly against the current Rwandan government but has not made any major attack on Rwanda since 2001.

Attanasio joined the Italian diplomatic service in 2003 and had previously served in Morocco, Nigeria, and Switzerland.

He is the second European ambassador to be killed while serving in the DRC.