Billionaire Narendra Raval of Devki Group has withdrawn a bid to lease Mumias Sugar Company with the aim of reviving it.

Through a statement shared on Social media, Devki in a public statement signed by Raval has claimed that they have decided to withdraw the bid due to the ongoing public interest which the matter has attracted and the call for a public-run bidding exercise.

“Devki Group of Companies wishes to inform the general public that it has withdrawn its bid to lease Mumias Sugar Company.

As a local investor with a deep understanding of the local operations, we had expressed interest in reviving the miller, following an invitation by the Receiver Manager.

However, given the ongoing public interest which the matter has attracted and the call for a public run bidding exercise, we have found it worthwhile to take out our application,” Devki Group wrote and approved by Raval.

Raval was planning to pump a whopping Ksh5 billion towards reviving Mumias Sugar.

Sh4 billion was to be used to upgrade the rundown production plant and Sh1 billion sweetener for farmers to return to cane production.

Mumias Sugar, which used to be Kenya’s leading producer at more than 250,000 tonnes a year, was beset by poor management, heavy debts, and years of mounting losses, prompting its closure.

The miller was in September 2019 placed under receivership by KCB Group to protect its assets and maintain its operations.

Its shares were then suspended from the Nairobi bourse, and the leasing deal will be keenly watched by shareholders, including the State with a 20 percent stake, and creditors who are owed over Sh11 billion.

Under the leasing deal, the successful firm will run the plant and pay monthly fees to KCB —which is owed Sh545 million — for up to 15 years. 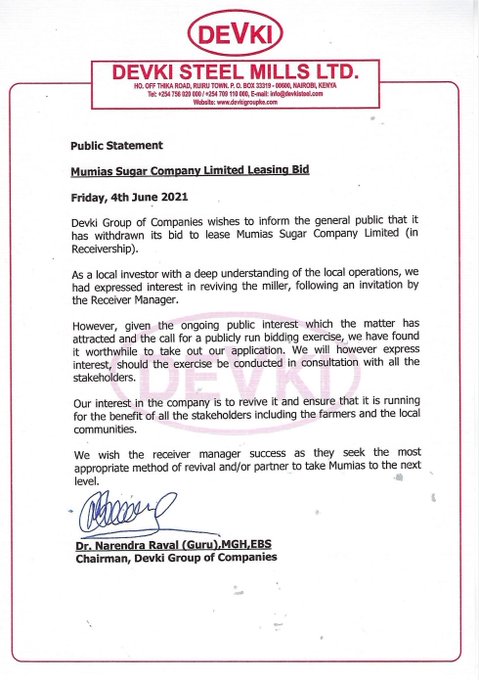 RELATED POST: Kitengela Four: Who Exhumed The Body Of Elijah Obuong From The Grave?