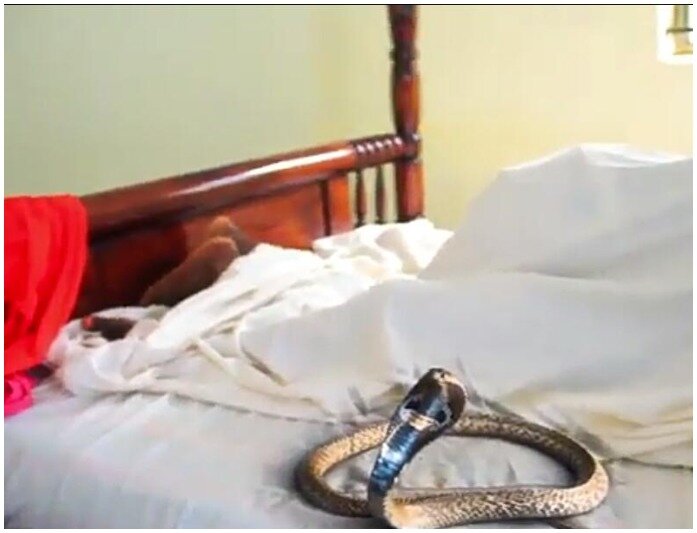 In a bizarre case of witchcraft, a venomous cobra slithered into a hotel room where a cheating couple got stuck while having sex.

The cobra, which belonged to the witchdoctor responsible for making the pair stuck, climbed onto the bed, coiled in a spiral shape and kept flicking its tongue.

The venomous serpent only moved smoothly over the surface of the bed with a oscillating motion, all this while it didn’t bite or harm the stuck couple in any way.

The cheating couple was busted after they let out loud yells to alert hotel management of their predicament.

The man tried to disengage after having sex with the married woman but his manhood couldn’t come out.

The pair shouted in pain prompting the management to break into the hotel room only to find them stuck.

The man was still lying on top of the lady but couldn’t come out no matter how hard he kept trying to pull himself off the lady.

The stuck coupled reeled in excruciating pain while covered in a white sheet as the cobra ‘kept guard’ until the witchdoctor arrived.

The commotion drew the attention of curious onlookers who thronged the hotel room  to witness the bizarre incident.

It’s reported that married woman kept cheating on her husband with the man prompting the frustrated spouse to seek a witchdoctor’s help to catch her in the act.

The witchdoctor cast a spell on the cheating wife that made any man apart from her husband get stuck in her during sex.

The stuck couple remained in their misery for hours with people peeping before the witchdoctor came to break the spell.

The strange witchcraft incident, which happened in Lumino, Eastern Uganda, was caught on tape by curious onlookers who recorded the stuck pair.

Watch the video below:

Related: Nairobi Lady Cecilia Wambui Confesses To Having Sex With Snakes And Corpses After Joining A Cult