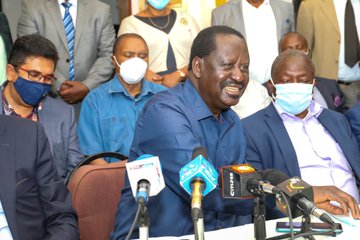 The two ‘Handshake’ partners are expected to kick off the collection of four million signatures for the BBI Constitutional (Amendment) Bill, 2020, at Kenyatta International Convention Centre.

“We now wish to inform all Kenyans that we shall launch collection of signatures as it is required by law for the Bill tomorrow. The process will be led by the president and former Prime Minister Raila,” Waweru said.

He called upon Kenyans to turn up for the event.

“We call upon those who want to see an end to corruption, ethnic antagonism, marginalisation of sections of society, empowerment of youth, women and people living with disability to board the BBI train,” Waweru said.

Junet said the Bill will not be gazetted as this was not required by law.

“The Bill is ready and Kenyans will see it tomorrow when the two principals launch it. We are not required to gazette the Bill but collect a million signatures and take them to the Independent Electoral and Boundaries Commission (IEBC) for verification,” Junet said.

He said the process will last for a week from tomorrow.

“We are required to collect a million signatures, but we have opted for four million so that we are able to collect them from all corners of the country.”

The collection of a million signatures and public outreach that starts tomorrow will end on December 2.

There was speculation that the process will be delayed after Uhuru met his Deputy William Ruto at State House last week. But tomorrow’s launch now means Uhuru and Raila are determined to see the process, which they initiated through the handshake, go the whole hog.

Ruto and his allies, a section of the religious groups and other interested Kenyans have been calling for a consensus on the BBI report.

However, Raila and his allies have challenged those opposed to it to lead the ‘No’ campaign and meet them at the ballot when the referendum is called.

RELATED POST:Ruto Quietly Jets Back In The Country After A Four-Day Dubai Trip