Unsubstantiated claims have been going around social media that COTU Secretary General Francis Atwoli has married a young slay queen.

As reported by a blogger Cyprian Nyakundi and published on his website, Nyakundi.com, on the eve of the veteran’s 72nd birthday,  Atwoli, who was first elected to the helm of COTU in 2001, “quietly” got married to a 21-year-old Muslim girl over the weekend, making her wife number four.

The same information was shared by local TV personality Jamila Mbugua through her Twitter page. 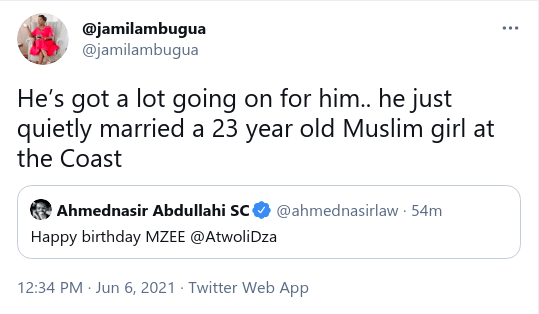 But Atwoli has come out to thank his third wife Mary Kilobi with a special message that rubbished the rumors.

Through his Twitter page, Atwoli has claimed that his birthday was organized by his wife Mary Kilobi, who surprised him with a yacht trip around the ocean.

“May I take this opportunity to say a BIG THANK YOU for all your warm birthday wishes. Sincere gratitude to my wife Mary Atwoli, Waziri @EugeneLWamalwa, and my son Philipo @themainpoacher who took me on a yacht trip around the Indian Ocean,” Atwoli wrote.

In 2018, Atwoli married the celebrated Swahili anchor Mary Kilobi as his third wife. Together they have been happily married and spend most of their time at their Kajiado home.

Atwoli has however not issued an official statement regarding marrying another young lady. But from the birthday photos, it may a scheme by his distractors to tarnish his name.

Atwoli has been in online battles recently after a street in Kileleshwa Nairobi was named after him by the Nairobi County led by Deputy Governor Anne Kananu.

That did not go well with some individuals who threatened to pull it down led by activist Boniface Mwangi.

But efforts to remove the signpost proved futile as they found out Atwoli had hired guards to man the signpost.

RELATED POST: Kitengela Four: Jack Anyango Yet To Be Found leaving His Family In Distress