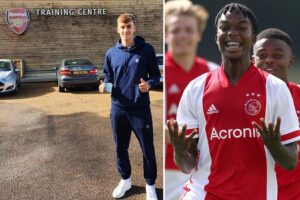 Arsenal managed to sign two more players before the transfer window shut on Monday night after the acquisition of Thomas Partey.

Nikolaj Moller and Joel Ideho joined and will go straight into the Gunners’ Professional Development Phase, under Steve Bould’s tutelage.

Both were signed after the arrival of Partey, who was done at the death on deadline day.

The Ghana international was Mikel Arteta’s top target and was the last signing to his senior squad.

As well as the 27-year-old, the Gunners splashed the cash with seven new arrivals.

But the newest additions, Moller and Ideho, have been touted for big futures.

The former has been called ‘the next Zlatan Ibrahimovic’ and was signed from Malmo for £450,000.

The Sweden Under-19 international has penned a four-year contract whereas Ideho has arrived from Holland.

The pacy winger had a short stint with Ajax but has spent much of his time with Willem II.

It has been a successful summer for Arteta, who landed Partey against the clock from Atletico Madrid.

The defensive midfielder was a priority for the Spaniard, who opened up on why he was so happy to sign him.

He said: “We have been watching Thomas for a while, so we’re now delighted to add such a high-quality player to our squad.

“He is a dynamic midfielder with great energy.

Watch the viral clip of Bridget Achieng Kenya is talking about