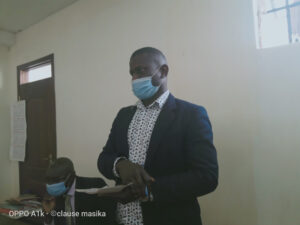 Nicolas Kuria who works with the American army in Afghanistan and his brother have been conned in a fake car deal.

Kuria  was in the country for a short holiday when his brother told him that he wanted to buy a car for business.

He told Kibera senior principal magistrate Sharon Maroro that he and his brother went to Kagundo Road where they found a man who said he had a car for sale.

Kuria said he withdrew Sh450,000 from his account and gave it to his brother to pay for the car.

Kuria’s brother Bernard Kahembe told the court he was driving the car after purchasing it when police arrested him.

“The officers asked me to explain to them where I got the car and I told them how I bought it. I even showed them my logbook, which they said was fake,” he said.

He said Oloo promised to repay him in instalments but had only given him Sh10,000.

Millicent Omanga Arrested For Over Drinking Beyond Curfew Hours