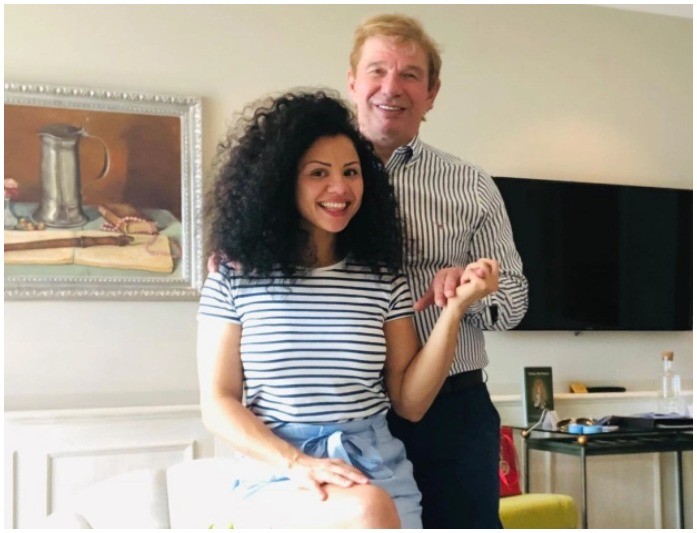 Brazilian boxer Viviane Obenauf has been arrested in connection with the brutal murder of her Swish hotelier husband.

Obenauf, 34, is accused of beating her husband Thomas, 61, to death in his restaurant Des Alpes at Interlaken in Switzerland on October 19.

The couple had only been married in January 2020, they appeared to be leading a blissful life in romantic photos they shared on Instagram.

The Brazilian boxer lived with her late husband in the Swiss town of Interlaken, where she had opened a gym and he owned a restaurant named ‘Des Alpes’.

The vicenarian is accused of attacking her sexagenarian husband at his restaurant Des Alpes at Interlaken in Switzerland on October 19.

The boxer’s husband succumbed to his injuries, he was found dead at his restaurant from massive injuries sustained during a violent assault.

Police had been investigating his death for nearly two months before their investigations pointed them to the victim’s wife as the main suspect.

The Brazilian boxer was arrested this week, she is still in custody ahead of her trial which is set to begin as soon as the prosecutor formally charges her.

Obenauf is said to have a history of violence against both men and women. People who know her say she is not shy of taking on anyone outside of the ring if she loses her temper.

The ill-tempered Brazilian boxer was briefly arrested in October 2016 for punching a man at a London club.

The 34 year old was arrested after she punched a man in the face for trying to grope her booty, she was celebrating her 30th birthday in the club at the time.

Obenauf was born in Rio de Janeiro, Brazil. She started out as a football player, before turning to gymnastics and eventually ended up as professional boxer at the age of 18.

The suspect relocated to Switzerland after retiring from boxing, where she met her late husband married him January 2020.

Star Newspaper Pulls Down Article Profiling Luos From Its Website