Through her Instagram stories in a questions and answer segment, Saumu revealed that she is no longer with with the Lamu senator following cases of assault.

“These are things he did to me. He almost killed me, I will forever fight for women to stand for their rights. Never allow a man to be violent to you,” a screenshot of Saumu’s response on Instagram reads.

Saumu and the Senator welcomed a child together last year despite having a rocky start in their relationship.

In a controversial incident in 2019, the lovebirds were attacked while having a good time at a popular club in Nairobi, along Thika Road hence sending the Senator to the Intensive Care Unit (ICU).

In a statement written by Saumu Mbuvi, who was in the company of the senator, the legislator was attacked by a gang of 10.

Ms Mbuvi mentioned that before the attack, the two were watching the UEFA Champions League finals at Memphis Lounge within the neighborhood of USIU in Kasarani.

Additionally, she reported that the Senator was attacked while she had left their table for the washrooms. Upon her return, she let out a cry of alarm leading to the goons dispersing after asking for forgiveness from the senator.

However, on their way to the car, the duo encountered another gang of nine men who were armed with clubs.

Saumu also has a daughter with Ben Gatu. The two parted ways after she claimed he was using her for political mileage and physically abusing her.

Following the breakup with her daughter’s father, she used her social media to advise women and create awareness against domestic violence by urging women to speak out and walk away if they find themselves in such situations.

HERE ARE MORE SCREENSHOTS OF WHAT SAUMU REVEALED: 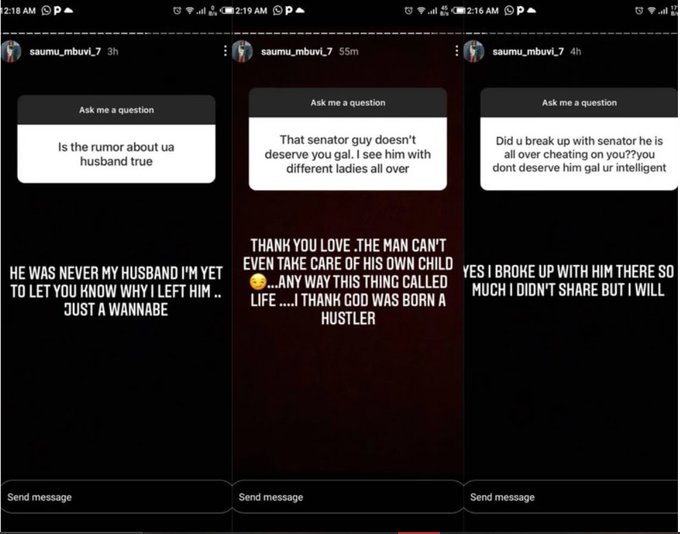